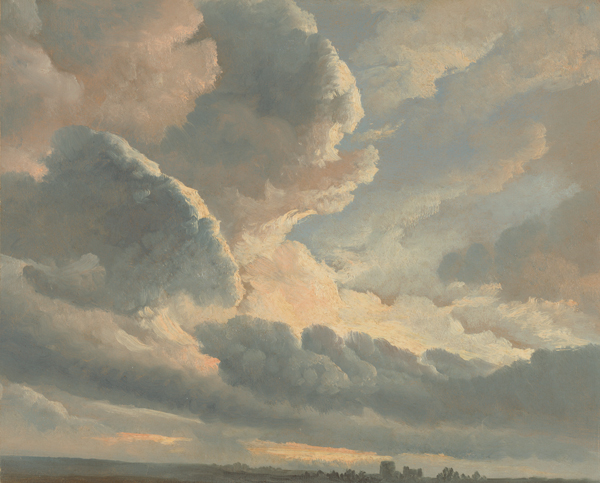 You've been somewhere, sometime when clouds caught your attention and you just kept looking?

Yeah, me too. When I aspire to capture clouds in paintings, I find it's surprisingly difficult. They're not what you think.

They sometimes look solid, as if you could touch or hold them in your hand, but sort of like those ridges left in sand by the forces of wind and erosion and waves, they're a texture you can never touch.

Clouds do have edges that can be torn or shattered by light and the forces of air, heat and cold. It can be hard for the eye to follow those edges, because they’re always in a state of flux, like waves in the sea, continually changing.

Even the darkest clouds contain light, energy, electricity, storms and mysteries inside their boundaries. And they dance all over the sky, throwing shadows and reflected light down on the planet surface.

For the painter of clouds, sometimes the hardest thing to see and to paint are the issues of “what is forward?” and “what is back?” Where does the light or the color or the quality or the direction of the paint stroke define the four dimensions?

A Quick Dip Into Art History...

The Dutch painters of the 16th - 17th centuries were masters of painting clouds.

Look at this painting below by Dutch painter Aert van der Neer. Here he uses varying densities cloud thickness, of dark and light, barely letting the stars emerge through the humid, thick quiet of night, lending an almost ominous stillness to this night scene. The moon's light on the edges of the clouds, and in-between the big cirrus cloud-shapes, tells us there is a vast space beyond. His use of light and depth adds an eery and fantastical focus to the moonlit areas. (In fact, van der Neer usually painted fantasies, but this painting is of an actual castle.)

Simon Alexandre Clement Denis
"Study of clouds with a sunset near rome", 1786-1801, Flemish

Later the French Impressionists used their brushes to explore the relationships of color. Their very brushstrokes capture the complex energies of 'seeing'.

"For me a landscape hardly exists at all as a landscape, because its appearance is constantly changing; but it lives by virtue of its surroundings, the air and the light which vary continually." __Claude Monet, c1880

Across the pond, the Hudson River School movement in New York, sometimes referred to as the ‘luminous’ painters, took the deep study of sky, light and the forces of nature and stretched it even further. One of the more popular and prolific of these painters was Albert Bierstadt.


Joseph M.W.Turner
"Van-Tromp, going about to please his Masters, Ships a Sea, getting a Good-Wetting", 1844, English (photo courtesy The Getty Online)

The influences of the Hudson River School movement can be seen in the current wave of today's Digital Matte Painting - background paintings used in film-making to bring epic qualities to films and games, of invented worlds and times.

If you'd like to stay informed about workshops, sales, shows and the Golden Dragonfly Academy for Art, the best place for now is my art newsletter.

I don't flood your inbox, but I will keep you informed. I never sell or share your email address or any other contact information with anyone else, and you can unsubscribe at any time.